How to use the 4th pentagram of Venus

The pentagram is known as a lucky symbol of love and as a symbol for the harmonious divine division in the golden ratio. Ancient buildings of Hellenistic Greece were built according to this harmonic division. Every project succeeds harmoniously if it is planned and carried out according to this basic order. Whoever aligns his life tasks according to this basic order of longing, abundance and bliss lives in harmony with the divine matrix of life.
Love also lives from this basic order of longing, abundance and bliss, which as a cosmic wave floods all of life. As conscious people, we appreciate this in our feelings. But how can this also be justified astrologically? That should be the subject of this thread.

Shiva actually suggested this topic by saying:
I find the articles about the pentagram of Venus extremely exciting. Especially since I have a special relationship with the pentagram.

This is not about transits of the sun over Venus or vice versa. Such transits do not contain this basic order of longing, abundance and bliss as contained in the pentagram. It's about the entire pentagram, which turns very slowly backwards through the zodiac signs by 2 degrees in 8 years in the radix of every person and can influence the whole life of the person in certain recurring phases.

The thoughts on this go back to the alchemist Agrippa von Nettesheim, who already related the people in the pentagram to the astrological signs in the 16th century. This in turn had the suggestion of Leonardo da Vinci, who in turn based a treatise by a Roman architect. 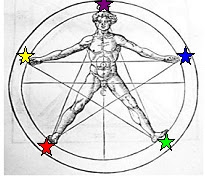 The correct archetypal-alchemical orientation goes back to the direction of rotation of the five biquintilistic sun / Venus encounters, which draw a complete pentagram in the firmament in 8 years.

The question that already moved Agrippa, and therefore also Shiva, is how does the pentagram in the natalism of the individual come about and influence his life?