Basic copper carbonate is a copper salt of carbonic acid. The pure copper (II) carbonate compound (CuCO3) could not be displayed yet. All previously known carbonate compounds of copper (II) are basic compounds such as, for example, those below Occurrence listed copper minerals. Metallic copper surfaces first become copper (I) oxide (Cu2O) oxidized and then with further oxidation of the CO2 in the air to green basic copper (II) carbonate, the patina. The latter, however, is rarely a pure basic carbonate and often contains other anions such as sulfate and / or chloride.

The deep blue carbonate is the pigment 2 CuCO3 Cu (OH)2which occurs naturally as azurite mineral. The production of this pigment is described in Gmelin.[6] The equation for this reaction is:

Under the influence of light, the deep blue carbonate slowly disintegrates into green malachite (CuCO3 Cu (OH)2). The green precipitate is a more basic pigment with the formula CuCO3Cu (OH)2, the aforementioned green malachite. The equation for this reaction is as follows: 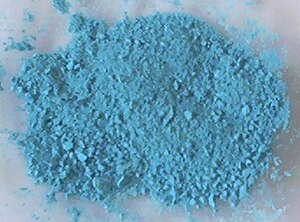 Anhydrous copper (II) carbonate is an odorless light blue powder, the monohydrate is dark green. It is insoluble in water and decomposes from 140 ° C to copper (II) oxide and carbon dioxide:

The reaction with acids produces carbon dioxide and the copper salt of the acid:

Copper (II) carbonate is used in the production of many copper compounds, such as copper sulfate, CuSO4 and copper (II) oxide, CuO, used.