Traveling in India by train

Traveling in India by rail (train) is one of the greatest experiences you can have. Train travel is safe, cheap and comfortable in the "AC" classes.

Only when traveling long distances, such as between Bombay and Delhi, or from Delhi to Varanasi, can one flight save time. 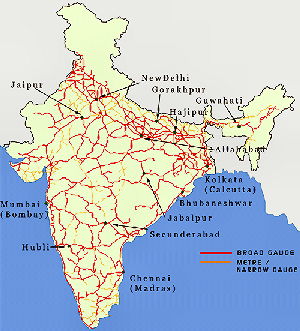 With around 63,000 km and 6,800 stations, the Indian rail network is the third largest in the world. Only the Russian and Chinese networks are larger.

The system looks like a mess, but it works. Of course, trains arrive too late by hours instead of minutes.

But they drive, and they are effective too. You made your reservation weeks ago, far away.

The train you have been waiting for is guaranteed to have a list with the booking on the compartment when it pulls into the station.

The ordered meals are ready at the next station and are delivered to the seat.

If your trip is twelve hours or more, consider breaking up your trip for a stopover at a hotel. Do you think it's worth it. Unless you can sleep well on a train.

A night train can then secure a day of travel and save a hotel room. During the day it is always very crowded in the train compartment.

But with a reservation for a bunk you have an exclusive right to it during the night between 9:00 p.m. and 6:00 a.m.

Secure your luggage with a padlock, there is usually a special chain under the seats.

On the official website of the "Indian Railway" you can find out train times for the journey. This site is good training for your India trip.

Under the link "Trains Between Im. Stations" at the top of the Indian Railway site you will find the timetables between the main locations in India.

Which train station is the right one? 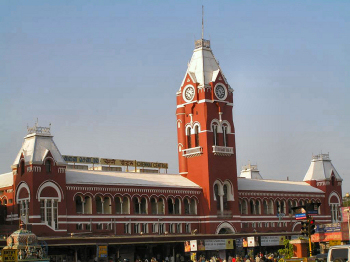 The plans only show direct connections.

For example, if you want to travel from Varanasi to Jaisalmer, you can find the travel timetables if you search for the connection Varanasi - Delhi and Delhi - Jaisalmer.

Or from Varanasi to Jaipur and then from Jaipur to Jaisalmer.

You should also note the names of the cities: Bombay can be found under Mumbay, Madras under Chenai, Calcutta under Kolkata.

The main train station in Delhi is New Delhi. The Delhi Junction Station is located in the center of Old Delhi. Other train stations, but further from the city center, are H. Nizamudin and Sarai Rohilla. Both train stations can be easily reached by taxi.

There are several train stations in Mumbay. Most impressive and important is the “Mumbai CST”. The impressive buildings of the station are from colonial times, at the time of Queen Victoria. If you can't find a suitable train from there, try “Mumbai BCT” or Dadar.

Kolkata Central Station is across the river in Howrah. Here you can find trains from Kolkata to the new Jalpaiguri, the railway line for Darjeeling.

In Agra, the main train station is the "Agra Cantonment (Agra Cantt)". The Taj Mahal is easy to get to from here by autorickshaw or taxi. The Agra Fort is closer to the city center.

In the region of Goa, the main train stations are at Madaon and Vasco da Gama.

Book tickets for your travels by train

You can also book tickets for the trains in advance.

You will find a brief overview of the different classes of trains on the following page: Which train class is the right one for me?