Whatever it takes House Soundtrack Miner

"Erobique" on film music: "A soundtrack doesn't need so much"

Carsten “Erobique” Meyer likes pop culture treasures and understatement as an attitude. He created a meta soundtrack for the “Tatortreiniger”. 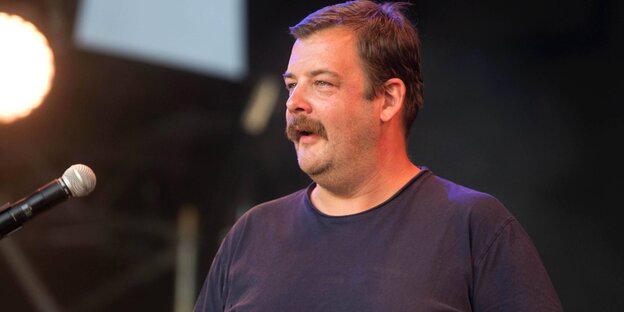 Carsten “Erobique” Meyer in his natural environment: on the stage of a festival Photo: imago / Future Image

taz: Mr. Meyer, composing a soundtrack is a service. The aim is to create music that underlines the action, comments or records it. The music that you created for the TV series “Der Tatortreiniger”, which is now ending, is uplifting. It's a drastic act, and the music sometimes works against it.

Carsten "Erobique" Meyer: It's about someone doing a thankless job. Nobody wants to scrape corpses off the floor, the gloomy atmosphere is only hinted at. Actually, it's more about the fact that the crime scene cleaner Schotty meets people at work and is exposed to communication. The great thing about him is his willingness to talk to anyone. This makes the action uplifting because it represents what happens when we are open to others in everyday life, when we start talking, outside the bubble.

Uplifting music has a purpose, it should make us feel good. Personally, I also listen to uplifting music when I am not feeling well. Then when I can use a little boost.

They created a meta soundtrack that quotes other soundtracks, sound atmospheres, and pop songs. From spaghetti western to baroque pop to soul. You bow to the soul singer Leroy Hutson. Heard you know Barry White's instrumentals. Their music also works beyond its quality as a soundtrack.

Soul is part of my DNA. I love Leroy Hutson and Barry White's songs and I listen to them diligently, but I don't sit there thinking how to quote them. It's not about copying sounds or taking up other ways of working, I just like to try it out. For “Der Tatortreiniger” I often composed into the blue. As with Library Music, I have a pool of melodies and songs from which director Arne Feldhusen and editor Benjamin Ikes have drawn.

When I listen to soundtracks by the French composer François de Roubaix for sea documentaries, I have the feeling that he is not making film music, but is researching tone sequences himself, digging deep layers of sound. Just as Jacques Cousteau explores the underwater world, de Roubaix also explores the world of melodies and devices.

Well recognized, de Roubaix is ​​an inspiration. What I've taken away from composers like him is sound research. It's the part of my job that is the most fun: What actually happens when I hit a ruler on the table. Making this tangible as music was also incorporated into the soundtrack afterwards.

born 1972 in Münsterland, lives and works in Hamburg. He has been soloing as Erobique since 1997, recorded two albums with International Pony in 2002 and 2006, recorded “Songs for Joy” with Jacques Palminger in 2009 and composed music for films and series. The album "Tatorteiniger Soundtracks" (a sexy / Broken Silence) is the compilation of his soundtracks for the TV series of the same name, in which his music was heard in all 31 parts.

For the soundtrack to "Wonderwall Music" George Harrison traveled to Mumbai, watched the film on the screen and made a sequence protocol. Were you on the set of "Tatortreiniger"?

No, I read the scripts. There was a phase in which I composed music, but before that I said goodbye to the plot and just started writing. Often works for me when I work with found objects. I was able to try out a friend's Hammond organ, for example. Took my recording device with me. A key was broken and the repeat function sounded strange, ratacktacktack ... that was incorporated. A soundtrack doesn't need that much. At the time of George Harrison's “Wonderwall Music” in the late sixties, the composers sat with a stopwatch and measured the soundtrack. I'm spared that today. I can put the film in my music program and set and edit the music very precisely.

The "Tatortreiniger" cover story triggers the Italo-Western Desperado sound. What does a theme song need to be recognizable?

When you look at it for the first time, the theme song is not there. From the third episode onwards, it develops a life of its own and becomes more of a wake-up call. My theme song for “The Crime Scene Cleaner” came about quickly. She is not elaborated, but has shown herself to be grateful. It's a cover story made up of a few tones that sounds instantly recognizable. It was important that I can do it with different styles of music and in different keys. It's a robust cover story, I can play with it and put it in other contexts.

Your film music is also reminiscent of the glorious pop past. Northern soul songs with harmonica sound. Or the whistled melody, a classic stylistic device from Spaghetti Western soundtracks. What is it that draws you into this past? Does she have something that cannot be obtained in the present?

I collect pop culture treasures. When I go to the studio, not only are there old organs and drums, but also records. There are pictures on the wall that I found at flea markets. The bookshelf is full of works on the most remote pop figures. This abundance of material then dissolves the reference torque and becomes an amorphous mass. I was a mod in my youth, the tasteful still means something to me. Certain analog recording techniques are important to me. Better to play a flute than to use a midi flute. It's always about what happens when a sound is physically generated and picked up by a microphone. I like that better than when it is calculated on the screen.

Your own label a sexy Records works without a promotion. Your soundtrack and singles and albums will also appear under a pseudonym. What kind of cosmos is that?

A sexy came about because I needed an outlet for the works of my fictional character Babyman. The less wind I make about it, the better. I was annoyed when suddenly a discography appeared and the people behind the aliases were revealed. I've always found the secret to be workable as a modus operandi.

At the beginning of the noughties you were part of International Pony, together with DJ Koze and Cosmic DJ, at that time for the major label Sony. Today you work independently again. Why?

We were on a major label, but International Pony wasn't mainstream. One positive effect of digitization is that the structures of music distribution have changed. Today it is easier to act independently. DJ Koze does it great with his label Pampa. My label also enables me to keep the reins in my own hands. It's much more pleasant than the marketing cycle at a major label that sucked us out. I am happy that I can be independent. I play music, do my gigs. Finished.

A pop star needs charisma, but good songs and good soundtracks are never unnecessarily intrusive. It is not without reason that your soundtrack has remained instrumental. Your music for “Der Tatorteiniger” sounds subtle.

There's absolutely no reason to blow music bigger than it needs to be for what it's supposed to be: the musical support of a TV series.

"My theme melody for 'Der Tatortreiniger' is not elaborated, but has proven to be grateful"

The series is clearly located in northern Germany, in a big city. The protagonist speaks with a Nordic tongue. As a newcomer, what defines this being for you?

It is a cliché that you have to work hard to be warm in the north, but there is something to it. When you are with people on your own, this broad Hamburg slang is suddenly very warm, despite all the gruffness. The rough and the Protestant is good for an old Westphalian Catholic like me. You said that my soundtrack sounds subtle, so I think that this North German is just as audible. But look here, the golden buttons, how discreet are they?

They remind me of Wim Thoelke, your jacket buttons. The German TV past comes to the fore again.

Yes, that's right, that's a classic BRD look. Understatement is a thing that is okay in Hanseatic.

Understatement is the hope that one's own abilities will be recognized without having to get caught up in advertising. What should I wear a colorful sweatshirt with something on it? A sweater in beige is sufficient.

You succeeded in creating a special understatement melody for the episode “Official Schimmel”. A very German word: official mold. But you garnish this melody with blue notes.

I am really proud of the filigree piece "Official Schimmel". I added meaningful music to the Jacques Tati-like ambience while walking through the instances. Of course, there are blue notes in there, that will work out at some point and that's the attraction of the story. I'll let that flow into a Henry Mancini motif from his soundtrack for “Inspector Clouseau”. A tribute. I actually only used my musical intuition to subordinate it to a scene. That was liberating.