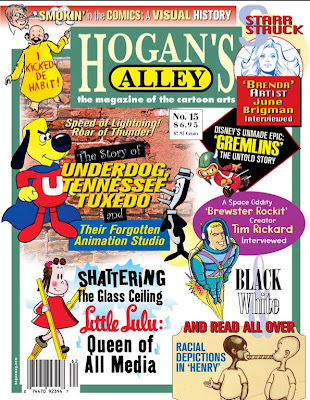 When I really should be drawing. My favorite story in it so far is about an animated feature that never was, an aborted collaboration between Walt Disney and a young Roald Dahl about Gremlins. That would've been something to see, as I think of Disney's and Dahl's sensibilities as being pretty dissimilar, though both had a good sense of the dark side of a story. Heck, Dahl's stories are about as dark as children's literature gets, and about as funny, too.

I hear that Wes Anderson is doing an animated version of Dahl's The Fantastic Mr. Fox. That might be something to see, too. I wish someone would do George's Marvelous Medicine. And if you're going to animate Dahl, it'd be great to see it done in the style of his long-time illustrator, the great Quentin Blake. His is another name I meant to add to that list of those who inspire me.

Now I gotta go draw, after I read the next article in Hogan's Alley.
<?