To find out who rules you Voltaire

Hundreds of Facebook users have shared an alleged quote that they attribute to the French philosopher Voltaire. It says: "To find out who rules over you, you only need to find out whom you are not allowed to criticize." The quote, however, comes from an article by the American neo-Nazi Kevin Alfred Strom published in 1993.

Since the end of September 2020, more than 1500 users have shared the alleged Voltaire quote on Facebook (here, here, here). Already in 2019 the quote spread on Telegram (here). In 2017, among other things, the Pirate Party shared it on Twitter (here).

On Telegram, the quote still referred to the European Union. There it said: "Who rules you #EU #Europe." During the corona pandemic 2020, users associate it with an alleged "corona dictatorship". For example, it says: "At the moment it is very clear who or what we are not allowed to criticize. The WHO, the RKI, Bill Gates and the exit restrictions." 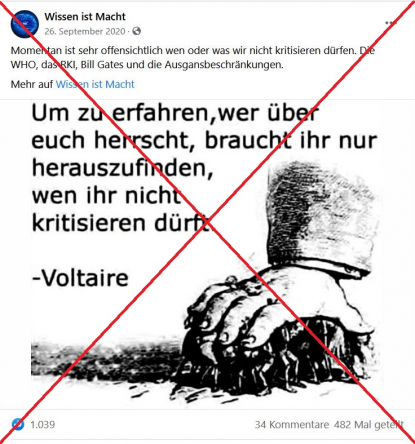 Wrong quotations from intellectuals or historical personalities keep circulating. For example, AFP refuted an alleged prophecy of the current Corona measures by George Orwell (here) and a false socially critical comment about the "silent majority" by Sophie Scholl (here).

Does the quote come from Voltaire?

AFP searched for the quote in full and found numerous blogs and forums with the alleged Voltaire quote. The oldest result was a forum post from January 21, 2015. Even then, users had discussed the authenticity of the quote.

A further search for individual key terms of the quote and the author led to the mention of the statement on a blog called "False Quotes" from 2017. This shows the quote in English and the same picture. Specifically, it says: "To learn who rules over you, simply find out who are not allowed to criticize." The author writes that the quote does not come from the philosopher Voltaire, "but from the text of a criminal right-wing extremist American Holocaust denier from 1993". The site also links to an article in the Guardian, which also cites the US neo-Nazi Kevin Strom as the source of the quote.

AFP then asked the Voltaire Foundation about the quote. The institute at Oxford University in Great Britain has specialized in the philosopher and, according to the homepage, has also published a final edition of Voltaire's oeuvre.

Dr. Birgit Mikus, head of department at the Voltaire Foundation, wrote in an email to AFP on April 30th: "The quote is actually incorrectly attributed to Voltaire. It appears that Kevin Alfred Strom, a well-known US neo-Nazi, wrote it."

The director of the institute, Nicholas Cronk, wrote in a blog article by the Voltaire Foundation in March 2017 that Voltaire is known for his one-liners, but "this saying, which is now regularly attributed to Voltaire, seems to have its origin in something which was written in 1993 by Kevin Alfred Strom, an American neo-Nazi and Holocaust denier ".

What does Kevin Alfred Strom say?

Strom wrote an article about the Voltaire quote in 2017. This can be read on the website of the so-called National Vanguard, a racist organization that advocates the "future quality of the race" and describes a "multi-racial society" as sick.

In this article by Strom with the title "Voltaire Didn’t Say It", the image emerges from the assertion. A Star of David can also be seen on the arm, which seems to be crushing people. The quotation is the English version already mentioned. Strom writes in this text that he uttered the words in an Internet broadcast in 1993.

To do this, he links a transcript of the program from that year, in which a modification of the quote can be read. Here it says: "To determine the true rulers of any society, all you must do is ask yourself this question: Who is it that I am not permitted to criticize?" (In German: To determine the true rulers of a society, all you have to do is ask yourself: Who shouldn't I criticize?)

AFP also contacted Strom himself about the quote. On April 4, he wrote in an email: "This quote is mine. I first published it in a National Alliance publication in 1993." He doesn't know who first attributed it to Voltaire, but it seems to have happened around 2007.

Conclusion: There is no evidence that Voltaire's quote was uttered in this way or anything similar. This was confirmed by the Voltaire Foundation, which published the philosopher's oeuvre in 200 volumes. She also pointed out that the quote is attributed to the US neo-Nazi Kevin Alfred Strom. He confirmed to AFP that he was the author. A transcript of a 1993 speech by Strom supports this statement.