Khaled salih what future for the kurds

Salih Muslim: The Kurds are not just interested in autonomy 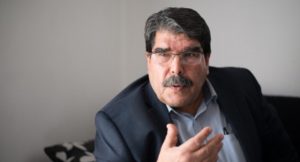 Gamze Kafar in an interview with Salih Müslüm, the former co-chair of the PYD, about the referendum in the Kurdish autonomous region in Iraq, about the offensive on Deir ez-Zor and the declaration from Damascus on a possible autonomy in Northern Syria; 05.10.2017

Many countries commented on the independence referendum in Iraqi Kurdistan. Turkey has announced that it will not accept the referendum. What do you think of the referendum?

In response to the referendum, Turkey said it wanted to close the Habur border crossing (between Turkey and Southern Kurdistan). An agreement was later reached with the Iraqi Prime Minister Abadi. What would you like to say on this subject?

There is a situation in which the Kurds are not recognized. They are not given any legal or living space. Abadi is a representative of Iraq and both he and Turkey should have refrained from making such a statement. Nobody has the right to starve the population. It is cruel to put pressure on people just because they are exercising the right to express their opinion.

The Syrian Democratic Forces (SDF) have launched an offensive on the city of Deir ez-Zor. The Baath regime, Iran and Hezbollah are also in the region. Russia has already attacked positions of the SDF. What can you say about it? In the last few days there has also been a conversation between Erdogan and Putin. What is Russia's policy?

Deir ez-Zor has its own military and civil council. That is the demand of the people there. The Syrian Democratic Forces are helping people to defend themselves. This procedure was planned together with the local population in order to drive the IS out of the region.

However, I think Russia, Syria and Iran have different goals. Above all, they have economic interests. Assad's advisor, Buseyna Saban, spoke about that oil– and natural gas reserves. It shows us that they are after other things. Unlike them, the aim of the Syrian Democratic Forces is to liberate the people. The population is aware of this and they have now set up their own forces to fight IS. As we have seen in the last few days, the other forces do not have the ability to fight IS. Although they have not liberated Deir ez-Zor, they are already moving to the other side of the Euphrates. You have a hard time fighting.

On one side of the Euphrates is now the US-backed forces of the SDF. On the opposite side is Russia with the Baath regime, Hezbollah and Iran. Could there be a confrontation in the future?

There is a declaration by the Syrian Democratic Forces. In it they declare that they do not want to fight any other forces except IS, but will defend themselves in the event of an attack. It is unjustified and unnecessary that the democratic forces of Syria are nevertheless set as a goal. Because there is currently still the problem with IS.

North of the Euphrates it is only the SDF and the local population who are fighting against IS in Deir ez-Zor. The US is only providing air support in the offensive. And the agreement is only limited to destroying ISIS. However, Russia has other goals than just destroying ISIS. South of the Euphrates it seems that there is no longer any Ba'ath regime in Deir ez-Zor. The land forces there are only Iran and Hezbollah. It is also practically impossible to speak of local forces in their ranks. The locals have the final say. What matters is what the Deir ez-Zor Military Council and the Civil Council decide.

The declaration came from Damascus that they could grant the Kurds autonomy. What does that mean for you?

Such a statement comes for the first time. You speak of autonomy. I'm afraid they want to cause confusion. Because the Kurds no longer want autonomy. You are part of a democratic Syria. It is impossible to refrain from a federal Syria. I think they're playing with the word autonomy and they're just trying to hold us off. These are maneuvers with which they try to split the fighting forces and the Arab units.

So is that an argument that was developed to crack down on the federal system?

This is a statement that is used solely for provocation. Other structures such as the Syrian Parliament have also made this statement. We are open to a dialogue and we can talk about anything. It is positive that one speaks about the rights of the Kurds, but one can only determine through dialogue what will happen in practice. We are open to sit together at the same table.

Local elections were recently held. There are two more stages to go. What does the country of Syria expect afterwards?

Our model is based on a democratic system that works from the bottom up. In other words, a democracy that is not shaped from above, but by the local population. This is exactly the foundation of democratic confederalism. First the chairmen of the municipality were elected. Participation was greater than what we expected. That was a very big step for us. This is how we saw that the population accepted the system. People want to take part in politics and shape it themselves. Now there are council elections, followed by the people's congress elections. These local elections taught us a lot. While we assumed a turnout of 500,000 people, 700,400 people took part in the election. That was the first step towards achieving democratic confederalism and the next steps will follow. What surprised us is the fact that other sections of the population participated more strongly in these elections than the Kurds themselves. The people make use of the right to self-determination and are involved in building up the communities. That is the success of our system. It is now important for us to complete this and not let the people's hopes run into the void.

Is there anything else you would like to conclude?

What I want to say is that we are living in the 21st century. In a democracy, people's expectations and opinions play an important role. Everyone wants to live in a democracy and in freedom. The subject that we devote ourselves most intensively to is the free human being. Man can change a lot with his mind and will. The slave can neither create democracy or freedom nor help shape a model of society. The steps we take are the basis for a free society. We create a system that allows society to determine itself. This system must be understood in the Middle East so that people can live together peacefully. That is why we expect a lot of support so that the system is understood everywhere.

The original of the interview was published on September 30, 2017 under the title “Müslüm: Kürtler artık özerkliği istemiyor” on the news site Artı Gerçek.