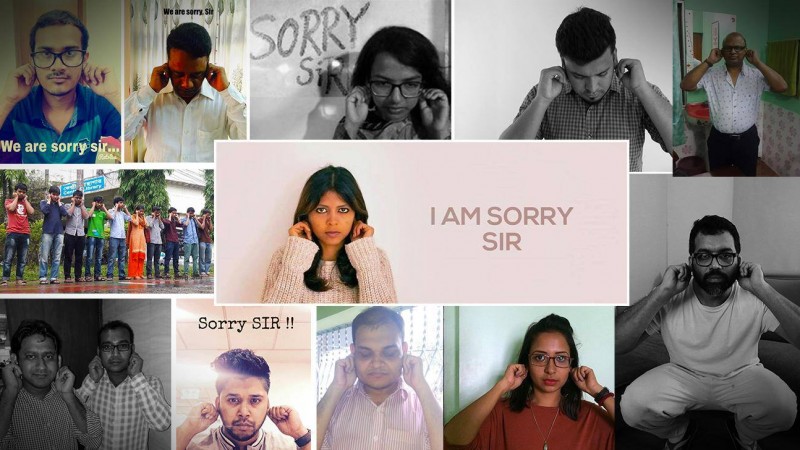 Bangladeshis posted pictures of themselves holding their ears in solidarity with the publicly humiliated headmaster. Image from Facebook

Bangladeshis have taken a stand against moral policing after a Hindu headmaster was made by an elected member of parliament to do squats while holding his ears on the false accusations of making disparaging statements about Islam.

Shyamal Kanti Bhakta, a principal in Narayanganj District near the capital city Dhaka, was initially suspended by his school as well following the public shaming. After a committee formed by the country's education minister found no evidence of the allegations against him of speaking against Islam, he was reinstated to his position.

The incident, which took place on 13 May, was captured on mobile phone video. The footage along with photos showed being shamed in front of a cheering crowd that included the local Member of Parliament AKM Salim Osman.

What led to the humiliating scene were accusations against the educator that he had punished a student in his class on May 8 and made a derogatory comment against Islam. However, Shyamal Kanti Bhakta denied making any negative remarks and said members of the school's managing committee held a grudge against him for not going along with their directives.

The footage of his public shaming went viral on social media, sparking outrage. The reactions of Member of Parliament Osman, who belongs to the Jatiya Party (part of the ruling coalition) from the Narayanganj-5 constituency also added fuel to the fire. He claimed that the punishment was the only way to save the teacher from the wrath of the mob for his remarks regarding Islam. He also commented to the media defiantly:

I don't feel any necessity to apologize to the headmaster who was punished as a nonbeliever, not as Hindu.

The population of Bangladesh is overwhelmingly Muslim, but Hindus represent about 9% of the country's religious make-up.

Osman's own party, however, called his behavior as “embarrassing” and having “tainted the party's image”. The country's education minister also condemned the incident and formed a probe committee to investigate the incident.

Bangladeshis on social media expressed their disgust as well. Corporal punishment in schools was banned a few years ago and generally is widely criticized. Applying it to not only an adult, but a teacher as well has been regarded as unbearably humiliating.

To show their support, people took photos of themselves in the same position that Shyamal Kanti Bhakta was made to adopt by the politician and posted them online. The trend eventually evolved into the #SorrySir campaign, attracting prominent online influencers and going viral. 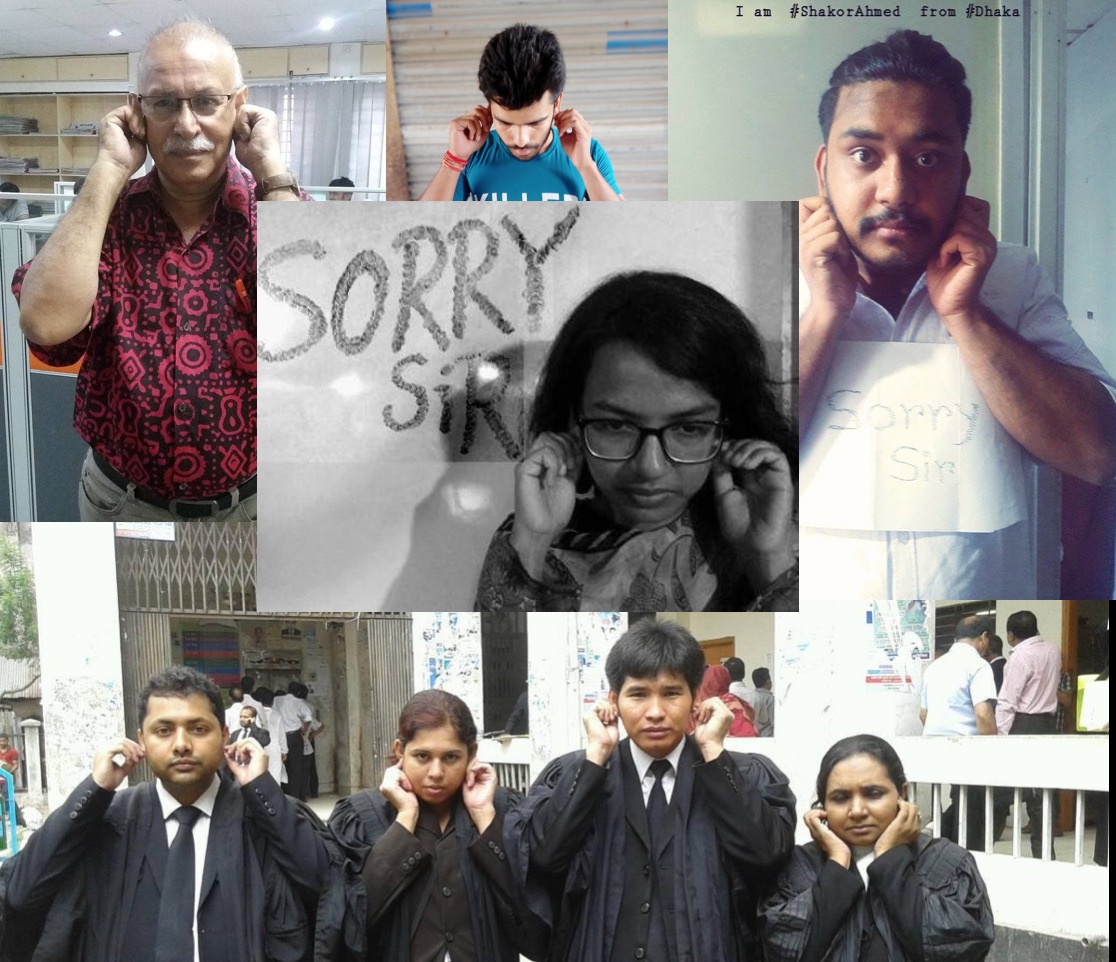 # SorrySir # That we live in a society where politicians are more powerful than the head principle in the very school campus.

# sorrySir # For those students who cheer up in the misery of their teacher who gave more than a decade giving knowledge to them.

# sorrySir # Because religion will mostly come up anywhere to end up a discussion.

And Barnali Mandal commented on Facebook with a photo of her holding her ears:

Let each human being live with proper honor and self respect. #SorrySir

People also protested in the streets and burned an effigy of the member of parliament.

The dangerous consequences of criticizing religion

On 18 May a High Court in Dhaka asked why Member of Parliament Osman and others should not face legal action for the headmaster's humiliation.

After feeling the pressure, Osman recently expressed his regret for the incident.

I'm ashamed of my behavior with Shyamal Kanti Bhakta on May 13 last.

It wasn't all rosy, however. Shyamal Kanti Bhakta has received threats online. Also, in a rally on 20 May, radical Islamist platform Hefazat-e-Islam demanded his punishment, saying he hurt the religious sentiments of Muslims.

Allegations of hurting religious sentiments have become a weapon for extremists in recent years in Bangladesh. Actual violence isn't uncommon, either. A series of planned attacks devastated several Buddhist monasteries and houses in Ramu in 2012, and assaults on other religious minorities are alarmingly becoming frequent.

The claims against Shyamal Kanti Bhakta have been found to be false: https://t.co/t81HtlOywf#SorrySir#Narayanganj#Bangladesh

Meanwhile, the government has been cracking down on accusations of blasphemy, although blasphemy is not criminalized in Bangladesh. In April 2016 a court in southwestern Bagerhat jailed two Hindu teachers for blasphemous comments against Islam, invoking a colonial-era law that makes insulting any religion a crime.

Several secular bloggers have been murdered in Bangladesh over the last few years, and authorities haven't taken any significant measures to deter the trend. After Niloy Neel was assasinated in August 2015, a police chief warned bloggers about their speech. He said, "Free-thinkers and bloggers should not cross the limit of tolerance while expressing their views on religion". Who needs a blasphemy law when there are so many who are eager to impose it in practice?