Digha is in Southwest Bengal in India. 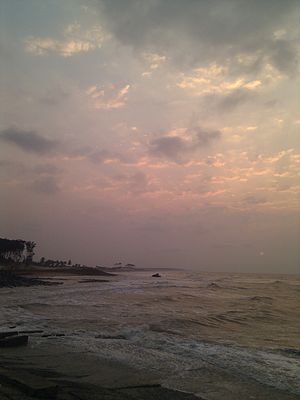 Digha is one of the most popular vacation destinations in West Bengal, particularly for people from Kolkata. This beach-town is located in the West Bengal-Odisha border and is around 200 km from Kolkata.

Digha is a 4- to 5-hour's journey by bus from Kolkata.

There are frequent bus services (A / C and mostly non A / C) to Digha from the Esplanade bus stand of Kolkata and many other parts of West Bengal.

There are also regular and frequent services to Digha from the Bus Terminus (Route 6) in the Garia suburb of Kolkata. Buses run 04: 00-08: 30 and there is also an afternoon bus service from the same state transport depot. Service is regular and residents from Jadavpur, Tollygunj, Rajpur, Sonarpur can easily use the good service.

It is advisable to make reservations in advance for weekends, national holidays and sessions like Durga Puja, Dipavali, Christmas etc ..

Traveling to Digha by road has become easier, promoting tourism in Digha and the surrounding beaches of Mandarmoni, Tajpur and Sankarpur. The roads are excellent and one can easily reach Digha from Kolkata in 4 hr of sedate driving.

Route: From Kolkata via Vidyasagar Setu and Kona Expressway take the NH-16 (old NH-6) till Kolaghat -> take a left turn on NH-116 (old NH-41) excellent roads till Nandkumar -> right turn on state highway all the way to Digha, via towns of Contai and Ramnagar.

The famous 'Hing er Kochuri' is a famous breakfast of Digha. There are many stalls and sweet shops all over digha which offers this delicious breakfast.

Another great idea would be to just buy the staple vegetarian fare at the hotel you are staying and have it delivered to your room. You can buy fresh fishes like ilish, pomfret, parshe and prawns from Mohona, Digha fish market in the morning and have it cooked at the numerous "Dada-Boudi'r" joints around Sea Hawk. Have this fish with your standard vegetarian lunch or dinner.

In the evening look for fried fish, crabs and prawns on the sea front in Digha.

Those who are fussy about the quality of cooking, have transport at their command and are looking for tasty fish preparations should go and have lunch at Shankarpur, some 14 km away - they prepare the fish much better than at Digha. The quality at Shankarpur is comparable to the Kolkata 5 star but is comparatively cheaper and the fish as fresh as you can demand. The trouble of traveling would be well compensated.

Always avoid the hotel agents at the Digha Station as their hotels are situated very far from the beach. It is better to consult the cycle-rickshawallas for better lodging facilities (they take commissions from the hotel guys)